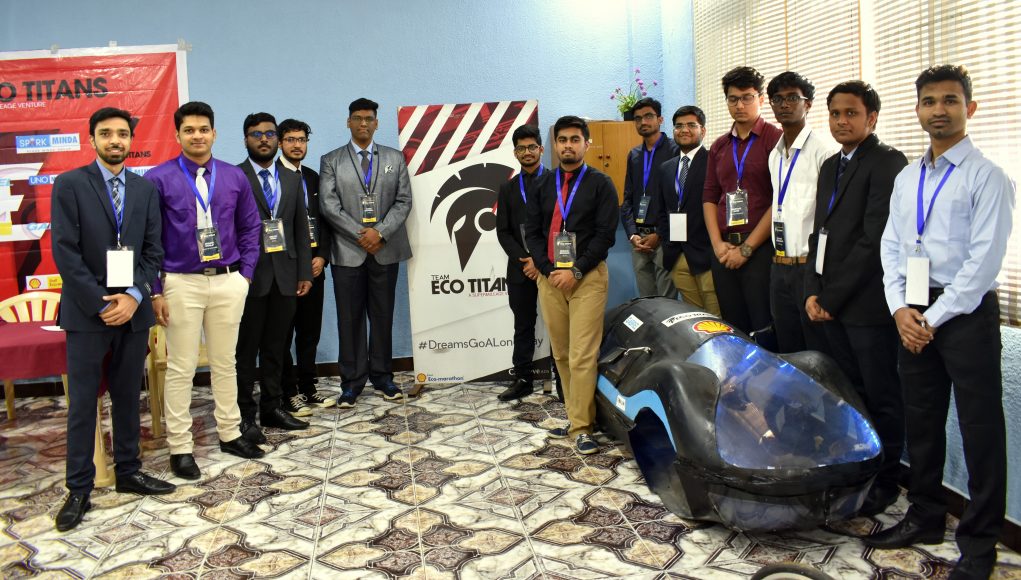 Team Eco-Titans, the official super mileage team of VIT University. We take part in the Shell Eco-Marathon Asia. The team targets to build a Super Mileage Vehicle that will represents
VIT University and India, in Shell Eco-Marathon. As a super-mileage venture, Team Eco Titans lives up to its motto, ‘dreams go a long way’ as it Endeavour’s to build a unique breed of
teardrop shaped, fuel efficient, prototype vehicles.
Apart from the technical venture they contest for the prestigious Communication award at the shell eco marathon. The Communication Award goes to the team who delivers the most
impactful campaign to promote the team. Applicants have to submit a communications plan, implementation summary, and an impact analysis. Team Eco Titans was declared as the Best
Communications team in India and runners up in Asia by Shell at the Shell Eco Marathon Asia 2017.
ET’18 is the coming together of high-efficiency technology, innovation, creativity and technical precision. It is a prototype model, built to seat a single person and designed to be as lightweight as possible. Weight of a vehicle is one of the major factors which increases fuel consumption and decreases mileage. Weight reduction is achieved by the use of the very lightweight yet highly durable Aluminum 6061 to build the chassis of the vehicle. The number of rods used to build the chassis is highly minimized by a detailed structural analysis of the vehicle using the simulation software such as ANSYS. The shape of the shell has been designed through multiple air flow simulations to closely resemble that of an aircraft as it easily cuts through air. This
streamlined design minimizes air resistance to the vehicle, allowing it to achieve higher speeds with relative ease.
The drivetrain of the vehicle consists of a continuous variable transmission (CVT) and lightweight sprockets which further contribute to weight reduction. The tires have alloy rims
fitted with ultra-light ceramic bearings which spin like a charm.
This ensures that the wheels turn smoothly with minimal internal friction, and thus, increasing the mileage of the vehicle.
The steering mechanism of ET’18 is built on the Ackerman steering geometry and has been simplified in the form of a bell-crank mechanism which allows for efficient handling of the
vehicle. The vehicle is fitted with hydraulic disc brakes, for both rear and front wheels, which ensure optimum stopping force for the vehicle under all conditions.
A major leap in fuel efficiency is achieved from the engine powering ET’18. It is a 49cc, single cylinder GY6 engine based on designs first developed by Honda. The engine has been modified
radically by removing the inefficient carburetor that is standard today in many vehicles. It has been replaced by an Electronic Fuel Injection (EFI) setup that is the cutting-edge technology
available today to achieve fuel efficiency in automobiles. This EFI setup is regulated by a highly efficient Engine Control Unit (ECU) model, called PE-3, which is a semi programmable digital
system. The engine has been fitted with a custom designed exhaust pipe which has tuned for further efficiency. Due to regulations of the Shell Eco Marathon event, the fuel pump is replaced by a pressurized pneumatic system which pushes the fuel to the injector.

The biggest gain in efficiency has been achieved by tuning the engine on a highly sensitive eddy current dynamometer facilitated by VIT. All the electrical connections on-board the vehicle have been consolidated to a custom fabricated power distribution board that eliminates redundant long wiring.
Yet, even amidst all these innovations and changes, the safety of the driver still remains of paramount importance. ET’18 leaves absolutely no stone unturned in this regard. The driver
compartment is fitted with an easy to handle fire extinguisher, a manually operated kill switch capable of killing the engine in the event of an accident and a failsafe in the form of a dead man
switch that kills the engine in case the driver loses consciousness. The compartment is completely insulated from the heat of the engine by a firewall and can be quickly exited by the
driver by opening the shell. The driver is secured to the seat by a five-point safety harness that is capable of handling loads 1.5 times the weight of the car. ET’18 also takes into consideration
human surroundings as the noise levels in a 5m radius around the car have been limited to a maximum of 80 decibels.
This season the team hopes to establish a new milestone for Indian teams participating in Shell Eco Marathon Asia by achieving a great mileage on track in Singapore, where the event is being hosted at the Changi Exhibition Centre.

Intelligent Automation – In Its Early Teens

HOW TO BE A SUCCESSFUL EXPORTER

Textile Industry – From Surviving to Thriving

Can The Indian Manufacturers Benefit From The China Exodus, By US...

0
FEATURED
Last year the Indian manufacturers welcomed the announcement about the government pushing for multiple defence corridors. We clearly acknowledge that this is a massive step and...
A Big Opportunity For Indian Manufacturers.