About the Book “Supercharge Your Applications with GraalVM”

Before I explain what is gone into this book, let me introduce GraalVM.

Here are some blogs on GraalVM, I had published before.

In this blog, I will talk about how GraalVM embraces polyglot, providing interoperability between various programming languages. I will then cover how it extends from Hotspot, and provides faster execution, and smaller footprints with “Ahead-of-time” compilations & other optimisations.

This blogs provides a hands on example of how to build a serverless application using fn project and run it on GraalVM.

GraalVM provides an Graal Just-in time (JIT) compiler, an implementation of JVMCI (Java Virtual Machine Compiler Interface), which is completely built on Java and uses Java Just in Time compiler (C2 compiler) optimization techniques as the baseline and builds on top of it. Graal JIT is much more sophisticated than Java C2 JIT compiler. GraalVM is a drop-in replacement with JDK, which means that all the applications that are currently running on JDK, should run on GraalVM without any application code changes.

While GraalVM is built on Java, it not only supports Java, but also enables polyglot development with JavaScript, Python, R, Ruby, C, and C++. It provides an extensible framework called Truffle, that allows any language to be built and run on the platform.

Developers working with Java will be able to put their knowledge to work with this practical guide to GraalVM and Cloud Native Microservices Java Frameworks. The book provides a hands-on approach to implementation and associated methodologies that will have you up-and-running, and productive in no time. The book will provide step-by-step explanations of essential concepts with simple and easy to understand examples.

This book would be a hands-on guide for developers who wish to optimize their apps’ performance and are looking for solutions. We will start by giving a quick introduction to GraalVM architecture and how things work under the hood. Developers would quickly move on to build explore the performance benefits they can gain by running their Java applications on GraalVM. We’ll learn how to create native images and understand how AOT can improve application performance significantly. We’ll then move on to explore examples of building polyglot applications and explore the interoperability with between languages, running on the same VM. We’ll explore Truffle framework to implement our own languages to run optimally GraalVM. Finally, we’ll also learn how GraalVM is specifically beneficial in cloud-native and micro services development.

Who this book is for?

The primary audience would be Java developers looking to optimize their application’s performance. This book would also be useful to Java developers who are exploring options to develop polyglot applications by using tooling from the Python/R/Ruby/Node.js ecosystem. Since this book is for experienced developers/programmers, readers must be well-versed with basic software development concepts and should have decent knowledge writing java code.

What this book covers

This chapter will walk through the evolution of JVM, and how it optimized the interpreter and compiler. It will walk through C1, C2 Compilers, the kind of code optimizations that the JVM performs to run Java programs faster.

This chapter does a deep dive on how JIT compilers and Java Hotspot works and how it JVM optimizes the code at runtime.

This chapter provides the architecture overview of Graal and the various architecture components. The chapter goes into details on how GraalVM works and how it provides a single VM for multiple language implementations. This chapter also covers the optimizations GraalVM brings on top of Standard JVM.

Chapter 5, Graal Compiler — Ahead of Time

This chapter is a hands-on tutorial, that walks through how to build native images and optimize and run these images, with Profile Guided Optimization techniques.

This chapter introduces the Truffle Polyglot Interoperability capabilities and high-level framework components. This will also cover how data can be transferred between applications, that are written in different languages, that are running on GraalVM.

This section introduces the Python, R and Java Truffle (Espresso). This is followed by a tutorial on how to use Polyglot API for interoperability between various languages.

This chapter covers the modern MicroServices Architecture and how the new frameworks such as Quarkus and Micronaut implement Graal for most optimum Microservices architecture. 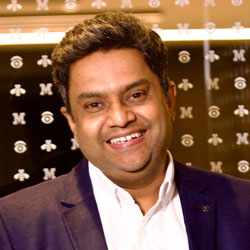 Mr. A B Vijay Kumar

He works with IBM Research, IBM cloud and cognitive, Nord cloud, Taos, and other IBM units, to bring an integrated technology PoV and build differentiators.

He is a recognized as subject matter expert for his contribution to advanced mobility in automotive and has led several implementations involving complex industry solutions. He specializes in mobile, cloud, containers, automotive, sensor-based machine-to-machine, Internet of Things, and telematics technologies. He has won various prestigious awards including the IBM Corporate award, Best of IBM 2015 and 2019, Outstanding technical achievement award.

He is a Member of IBM Academy of Technology

A B Vijayakumar’s Book is Available on:

0
BEST PRACTICES
An economist once told us that there is no definite way to calculate the GDP of the country. GDP effectively means that the total...

Intelligent Automation – In Its Early Teens

Ten Building Blocks of Sustainable Manufacturing where Industry 4.0 can help